13.1 Miles. I have never aspired to be a runner. Two years ago, I downloaded the couch to 5K app on my phone. I thought, well it’d be nice if I could run a 5K, that’s 3.1 miles. Who knew that two years later, I’d be running my 3rd half marathon, 13.1 miles. It’s not easy, but it is worth it. I kept telling myself, during my training. This is the last one, and possibly it is. I just don’t know. I think I’m more interested in running a 10K, I can run that easily, and not kill myself during training. There is just something about those 8, 9, 10 mile training runs, that beat my body down. It took me longer than usual to recover, and my right knee was really hurting. If you saw me, there were times I was icing my knee while driving, icing my knee at a movie or our comedy show, and icing my knee most evenings while drinking wine and watching The Walking Dead. But, that being said, I finished this half marathon and thought I could do that again.

There really is an exhilaration that comes from running and completing a tough run. For me, it is very emotional. I cry while running during training and during the race. There are times, my body feels heavy, aches or is exhausted but what really keeps me going is thinking of Maggie. I can’t tell you how many times, I would want to stop running before I should, but I would say out loud while running “Keep running, don’t stop, Maggie doesn’t get to quit.” I’m sure anybody that I pass thinks I’m crazy but it really helps me focus. Because Maggie doesn’t get to quit Rett, we don’t get to stop fighting for her, its not okay to cruise to the end. We have to finish strong.

This race was extremely special for me. This was my second time running the Disney Avengers half marathon for Girl Power 2 cure. The second time running with my niece Kaylen and the first time with my brother in law Sean, by the way…he jammed my finger playing tetherball on the playground when I was in 3rd and he was in 5th grade, so he owes me a half marathon or two.

We were Team Magnolia. It is amazing having my family run with me. I was feeling down about raising money for this race, because our friends and family have been donating to various events this past year and I felt like it was too much for me to ask them again. Then Sean emailed his friends and they started donating. We raised almost $8K and I can’t thank Sean, Kaylen and all your friends enough.

Running the race, was such a great experience. I wasn’t in a lot of pain, I kept the same pace throughout the race and I had a good time doing it. I ran the first 7 miles or so with Kristin Hileman who works with Girl Power 2 Cure.

I hadn’t really hung out with her, so this was like having brunch with a friend, but we’re running and eating weird race gels and beans. I enjoyed our time together. Its hard to explain how easy it is to hang out with other Rett parents that I barely know. But I do feel a strong bond with other Rett parents – that unspoken connection that just says ” I know what you’re going through”. We are all dealing with this horrible disease, fighting for a cure and trying to have a life along the way. It’s just nice. 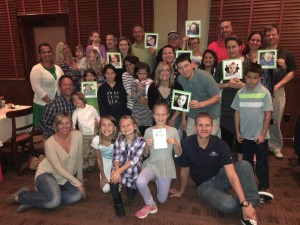 I really am happy that I ran the half marathon. I’m so proud of Sean and Kaylen for doing it with me. But honestly, I’m in awe of my niece Kaylen and the amazing woman she is turning into. When Sean and I really couldn’t put into words how we were feeling after the race, Kaylen does it  eloquently. Maggie has a great role model in her cousin. Of course, Maggie is a great role model for everyone, how not to give up and finish strong.

Also, thanks to my mom and AJ for making us our #magnoliashope superhero capes. Team Magnolia really is awesome.