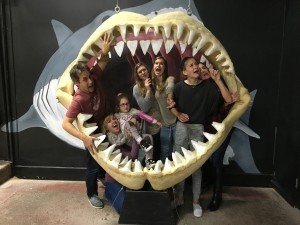 In Los Angeles, everything shuts down for the final two weeks of the year, as everyone escapes back to their family or goes on vacation.  We’re fortunate to be able to do both most years.  We typically spend Christmas in Texas with Jenny’s family and then go do a vacation with my family some place beachy.  Though the last two years have been different.

Last year we planned on going to Aruba to meet up with my family after Texas, just the two of us, leaving Maggie to play with her cousins and grandparents in Texas.  But, you may recall that Maggie got sick and we forgot our passports anyhow.  The year before, we had just gotten diagnosed and we were going to see specialists in Texas anyhow, so we stayed in Texas for an extended stay.

This year we were determined to make it to see my family.  It was my dad’s 70th birthday and my mom had booked a Disney Cruise for all of us to enjoy.  Considering the importance of the event we were prepared to do everything we could to make sure we made it.  We basically wrapped Maggie in a bubble for a month and ushered her away from anyone with a runny nose who so much as looked at her.  When school called to let us know that 11 kids were out sick, Jenny put aside all the other things she had to do and kept Maggie out of school until we got an all clear sign.  Unfortunately, that didn’t come and for two weeks, Jenny and Maggie had to entertain themselves outside of school.

This wasn’t just overprotective parents, nor was it solely for the sake of the vacation.  Maggie gets sick.   A lot.  And it lasts forever.  Even a simple cold devolves into bronchial infections in a matter of days which lingers for a few weeks before tapering off ever so slowly.  When 11 kids are out, it’s no joke of a sickness and one we weren’t willing to risk Maggie’s well being for.  It makes us wonder how we’ll handle general education when she gets to kindergarten.  She’s been out of school for about 6 weeks already this year due to illness and that’s with us being hyper vigilant and a classroom of 8, a school population of only about 24.  Unfortunately, I don’t think IEPs provide for bubbles, so we’ll just hope her immune system can build up some fight, though I’m afraid it’s already a little busy fighting off Rett Syndrome.

Despite all of our efforts, she woke up on the day we were set to fly with a little bit of congestion.  It wasn’t bad, though, so we decided to fly anyhow.  Considering the last trip we took, where it was very difficult for her to control her body, we were prescribed an anti-anxiety medication that would help calm her and possibly even knock her out.  Basically kids Xanax.  In fact, exactly kids Xanax.  We doubted the congestion would bother her either way, but if she slept through the flight, which she usually does, it wouldn’t have been a problem at all.  When we got to the airport on this day, though, she was a wreck – crying inconsolably, unwilling to walk, unhappy to be carried.  It was no treat.  We were granted access to a private room in the United Airlines club by an empathetic employee of United ( I know – I didn’t think they existed either).  In this private dark room with no sound but her parents singing her favorite songs, her favorite snacks and no other sensory input she should have calmed down.  It’s helped ease her sensory issues every single time in the past.  But not this time.  She couldn’t calm down and was screaming and crying the entire time.

We thought, this was exactly the type of situation we got the prescription for and we proceeded to administer the drugs to her.  She calmed soon after and though she didn’t sleep at all on the flight – we were relieved that at least she didn’t scream and cry the whole way.  When we got off the plane, she was still unwilling to walk, and seemed uncomfortable standing, so Jenny carried her all the way to her parent’s house.  Well, their car, but you get my point.  Outside of the car is exactly where Maggie decided she couldn’t keep in all the blueberries she ate on the plane and she proceeded to throw up down Jenny’s shirt.  We all laughed about it, cause really what else are you going to do.

When we got there, I carried her in and set her down.  She took one step and fell.  I carried her to her room and consoled her until she stopped crying.  I let her down off the bed and she, again, took 1 step and fell, this time crashing her face into the wall.  While no one said it, we all thought that Rett Syndrome had suddenly taken her ability to walk, but Jenny took to the internet and learned that side effects of this medication is a loss of muscle use and balance.   A scary endeavor, and the next morning she was better, though it took her a few minutes bit to be comfortable walking and a few days for us to stop feeling terrible about giving her drugs that caused her such discomfort.

I’m not trying to make out the travel out as a terrible endeavor.  It wasn’t great, but we’ve certainly had harder times traveling (see this blog post from before we had ever heard of Rett Syndrome: http://walkingtimemom.com/?p=944 and http://walkingtimemom.com/?p=953).  And none of these small hiccups will keep us from traveling.  They’re small inconveniences, and the reward of seeing new places, experiencing new things, and spending time with family is too great.

The rest of the Texas leg of the trip was fairly uneventful from a health perspective, though it was filled with fun events with her cousins and family.  She had been asking about her cousins and her aunt and uncle and grammy and pops for so long on her Tobii, it was fun finally getting to see them.  They’re all so good with her, trying to communicate with her on her computer, and doing what they can to include her. Like this one time we got eaten by a shark.

Grammy and Pops pulled the lion share of the work, volunteering to watch her and put her to bed almost every night we were there, so we could get some quality time with our nieces, and Aunt Lynn and Uncle Sean.

Christmas Eve Maggie partied so hard she crashed on the couch.  In moments like these, Jenny and I steal amazed glances at each other.  It’s nice when Maggie can do adorable things that typical kids can do without problem – like falling asleep in the middle of a party.  Plus we were leaving for the next leg of the trip on Christmas Day, so it was nice for her to fall asleep at a regular time and nicer that we were able to stay late and spend some extra time with the family.  On top of all that, she was going to need that sleep for the journey we were about to go on.

I’ll write about our time on the cruise for our next post.  Hope everyone had a good holiday and got to celebrate with friends and family alike.  Or not, if you didn’t want to.

One thought on “A two week journey in two parts. Part 1.”