Off on a solo adventure

I have mixed emotions when I travel away from Jenny, Maggie and Gray.  On one hand, things are hard at home and it’s a struggle to stay on top of everything when both of us are home, making me feeling guilty to leave Jenny to handle everything herself .  On the other hand, there are still important things we need to do.

We made a documentary about our life with Rett Syndrome with the goal of sharing our story on a larger platform than this blog and Facebook.  Part of that strategy includes film festivals around the country and world.  We had the opportunity to screen at the Vail Film Festival a few months back and today I’m in Minnesota to share the film with the Catalyst Content crowd.

When we made the movie, we hoped it would be uplifting, and on some level it is.  But it’s also hard to watch and hard to talk about with people, especially strangers.  We really open our lives up for people to see and I didn’t realize how vulnerable that would make me feel standing in front of people who have just been introduced to the hardest parts of our lives.  I try to disassociate as the subject of the movie and present solely as the filmmaker, but that’s not really possible.  At the Vail screenings, Jenny cried.  Here in Duluth, I’ll be standing up there alone. 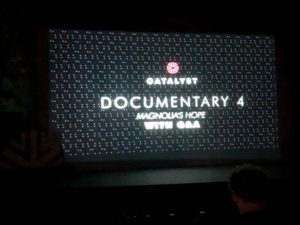 Awareness of the disease may not translate directly into major dollars for research, but it does make me feel like I’m doing something.  I tell myself it’s an important thing to do – that I have to be here to tell people about my experience with Rett Syndrome – to answer questions.   I have a particular set of skills that makes building awareness something I’m capable of doing, so I’m going to keep doing it.

As it turned out, Maggie, Gray and Jenny had to flee fires in LA.  She wasn’t eating, and the air quality was awful, so a weekend with Grammy and Pops seemed like it’d be a good idea.  As it turns out, her eating didn’t get better and she spent one of those weekend nights in the hospital with an IV, confirming our fears that a feeding tube is now something that we can no longer hold off.

While Jenny had to deal with a mountain of trouble for the kids, I was evangelizing Maggie’s story in Minnesota.  Until there’s a cure, all four of us will be putting out fires every day and sharing Maggie’s story to whoever will listen.