I’ve learned a lot of things the past few years dealing with Rett Syndrome. First, every time I write Rett, it gets auto corrected to Rest, which is hilarious. I wish she had Rest Syndrome  A syndrome where everyone is well rested, sounds amazing.

Secondly, Magnolia’s perseverance is unwavering. Every once in a while, I’ll sit back and think. We got this. And we do, but then we get thrown a curve ball. Seizures were a big curve ball. This past year of seizures has been infuriating. I hate to say this, but seizures take Rett to a whole new level.

The first few months with seizures, I believe I already talked about. They were very scary, our lives were spiraling out of control, emergency rooms, ambulance rides, scary phone calls, life or death became the norm. Then we got the seizures under control. Then the  problem was, her medicine. Maggie was on a seizure med called Keppra. It helped her seizures and gave us all some relief, but then the side effects took, well effect. She became extremely irritated, emotional and dare I say, rage. We had frequent moments, where I would have to pin her down, while she clenched my back or neck and dug in with her fingers, she would bite my shoulder and scream. Googling Keppra side effects, keppra rage was a recurring theme. Maggie had it, and we wanted it to stop. The doctor agreed, but we couldn’t stop her meds, her seizures were uncontrollable with out it. So we had to put her on a different medication, while slowly weaning her off of Keppra. It took three months to safely wean her off of this medication and get it out of her system. When the drug was completely out of her system, we could tell a big difference. We went from rage back to our vibrant Magnolia. It seemed, we finally had her back, well Maggie with seizures.

We spent the next couple of months getting the dose right on her new medication Topimax. Topimax was finally working, but I noticed some different side effects. Some hair thinning and exhaustion. Since these side effects were better than rage, we’ve stuck with it. We started giving her some Biotin and that helped with her hair. Its a constant balance with her exhaustion though. She naps, we diffuse oils to wake her, give her snacks, anything to keep her awake enough to do school and therapies. We’ve learned to manage.

A few months ago, Maggie’s seizures increased. Her doctor increased her medicine, not much, but enough to stop the seizures. Then we noticed, she was having a harder time using her eye gaze computer. She was using it less frequently. Where, she used to interject a comment or two into conversations that were happening around her. She now barely tells us what she needs unless we insist upon it. Before the medication she was starting to build sentences, structuring two to three words together. All of a sudden, it was gone.

The hardest part  sometimes is noticing something new happening with her, it is usually gradual. So when we realize it, we realize how much she has been struggling. Of course, in the past, there were days she used her computer a bunch, then other days, not as much. This is different. Its watching her language disappear, again. Its frustrating, for her and for us.

She is learning to read and write, but we have to force her, its taking longer and by the end of most days, I’m at a loss for her. I tell myself, as long as she is happy, we will keep moving forward, pushing her to communicate, to do whatever she can. I’ve been positive this has been going on since the increase of her seizure medication.

Well, the past two weeks we have seen an increase with her seizures, but not just that, her GI issues are all over the place and her breathing is worse. At first, I thought it was because we had traveled to Florida, travel tends to cause seizures because of exhaustion and dehydration. I spoke to her doctor and she agreed.But here we are two weeks later and her seizures have increased. So now we wait, I have a team of three doctors trying to figure out what we should do. Shelly and I brainstormed today anything we could think of that could be causing the increase of issues.

Then I spoke with her Epilepsy Neuro at CHLA. We discussed everything that has been happening. I mentioned that Maggie wasn’t using her computer as much. Right away, her doctor says, “That isn’t what we want happening. We will lower her dose.” I was floored, Maggie’s seizures have been increasing but we are lowering her dose. So I did it. I had to trust that if something bad happens, I can take care of it, Shelly can take care of it. Maggie will be okay, we will make it to the hospital if we need to.

The first day I lowered her dose, we were on high alert for more seizures. None happened. Know what happened though? She used her computer all day. She was more alert and happy. Its been a week and she hasn’t had a seizure, she has been doing more. grabbing for things, pushing herself to do more, on her own volition. Life is strange sometimes. Life with Rett is an emotional rollercoaster. A lot of times, things don’t go our way. This past week did. I had prepared myself that I may have to save her life if she has a big seizure, since she is on less medication. Not because I’m neurotic but because its just our reality. Instead, we had a good week.

She is so smart, funny and cute, like any other 7 year old.  This past week, she has told me on several different occasions she wants a dog. Then she spelled the word “ocean” with a “C”not a “Sh”. She misses her dad, she wants to go surfing and she is over Frozen. She has a lot to say. Hopefully she continues to be able to say it. I need Rest Syndrome.

Not kidding. This is Magnolia at Speech Therapy the day I lowered her seizure medication dose. She was so happy, using her computer. 🙂 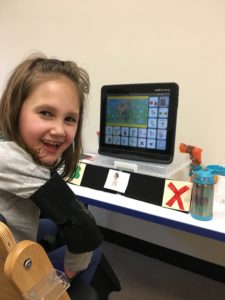 3 thoughts on “A seizure rollercoaster ride….”