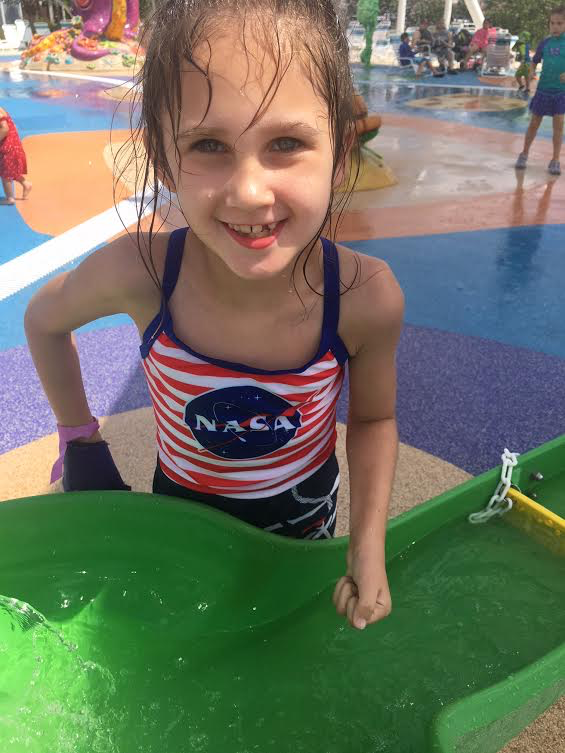 The stars at night are big and bright….(insert 3 claps) deep in the heart of Texas.

Since Magnolia was 2 years old, we haven’t gone to Texas in the summer. First it was too hard to travel because of sensory overload, then her body couldn’t regulate heat, then we had Gray and then she started having seizures and it was hard to travel again.

All of these things are still true, but I really wanted to go to San Antonio for a bit this summer.  I have so many great memories of my childhood and I wanted Mags and Gray to have some of those experiences.  Plus, AJ had to work back in LA, and Shelly was going to see her family, so I was going to be alone.   Texas here we come.  We had to fly into Austin because there weren’t any direct flights available into San Antonio, so my mom drove up from SA to pick us up from the airport. From there we said goodbye to Shelly,  she had never been to Austin, so she was off on her own adventure and we were off to ours.

Once we got to San Antonio it was so hot. Seriously, so hot. Which was unfortunate because we chose to travel in June so the weather wouldn’t be unbearable. Well apparently, this particular June in Texas was abnormally hot. At first, Maggie couldn’t walk outside without melting. Literally, she would just melt into the arms  of whomever was closest, she didn’t want to walk. She could, but she didn’t want to. Thankfully, we traveled with her stroller – a Special Tomato that she loves – and we used it quite a bit. The key to Texas heat is get out early when the heat isn’t unbearable, and hurry yourself to a pool, splash pad, or anything water related.

We spent a lot of our days swimming at my sister’s house.  We could have done this every day.  We swam, ate hotdogs and watched movies.  Maggie even got in a little pool volleyball.

There’s a new development in San Antonio on the grounds of a former brewery, called the Pearl.  Every time we go to San Antonio, there’s something new here.  Usually it’s restaurants with the Texas version of Foodie Treats ™ like charred brussel sprouts with bacon, or mac and cheese and bacon, or hamburgers with a bacon aioli, but this time they had fast casual restaurants where I got an actual quinoa bowl!  In Texas!  And they had this great splash pad that kids just ran through all day.

We also got a chance to head over to Morgan’s Wonderland which is one of the only all access, all abilities amusement parks in the world.  This year they opened up Inspiration Island, the only all-access, all abilities water park in the world.  It was an incredible expereince. It is set up as a bunch of splash pads with different themes. We hopped around the park playing at each splash pad.  Getting to see Maggie run through the water, was such a treat.  Trying to pull Gray, out of the water park was not such a treat. It really is an amazing and inclusive water park. Instead of stares and wonder, its families with kids with varying degrees of disabilities along with able kids, all just having a great time. 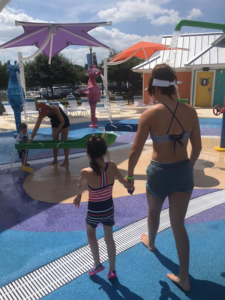 We also got to go down to The Gulf Coast. We used to come here as kids every summer and I have such incredible memories of this place.  The first thing I noticed, considering we were staying in the same condo we did  20 years ago, was that this place hadn’t changed AT ALL.  The weather was hot, the water was warm and the beach was filled with sea life. We watched the tiny clams bury themselves after each wave. We got to touch live shrimp. We watched two teenage boys catch fish with a net, then help release the fish  into the waves. It was fun.

Then we went to the Texas State Aquarium. What a fun aquarium. This was probably our hardest day. Mags had 5 seizures and was crying for most of the day, plus we weren’t actually in the water, just looking at it. My sister and nieces played with Gray while I tended to her. I had to call Magnolia’s Neuro and get a RX refill for her emergency meds. Then my mom and I ended up having to find a pharmacy that could refill the RX that day. There was nothing really life threatening, it was just frustrating for her and, not being able to really make it go away, it was frustrating for me too.

One thing we did learn on this trip is that Lindsey and Mags are frenemies. They are very competitive when it comes to board games, and Lindsey did not let Maggie off easy, knocking her out of game after game.  Maggie would get up from her seat, walk to Lindsay and stand right in her face – fronting.  But when it comes to life, they are besties. Kaylen and Tyler both drove in town to see Mags and she was so happy to see them too. Not sure why I don’t have a pic of Sadie and Kelsey, next time.

Our lives can’t completely revolve around Mags, we do have another kid and we try to incorporate things for him too. So we went to Zoorassic Park at the San Antonio Zoo. For a short time, apparently, they have brought in dinosaurs and now none of the kids pay attention to the real animals, as they obsess over the gigantic animatronics. Honestly, the dinosaurs were amazing. Gray is definitely in his dinosaur phase, which means we are all in a dinosaur phase and loving it.  Hard to tell if Maggie is out of whatever dinosaur phase she may have been in, but she does like to see Gray get excited, so, she, too, had a smile on her face.

Right next to the zoo there is a Kiddie Park with tiny rides for little kids.  They seem super easy, but, Maggie and I definitely got nauseous spinning on the last ride.  I think she’s more of a roller coaster girl. I know she makes us feel like we’re on a roller coaster all the time.

We had so much planned for our time San Antonio. Morgan’s Wonderland, Kiddie Park, SA Zoo, swimming, grilling and then off to the Gulf Coast. We were able to spend so much time with my sister, brother in law, their four girls ages 14, 16, 20 and 22 and our parents. They are extremely helpful. And because they were all so helpful, we were able to go on all these adventures, making brand new memories for me and allowing my kids to experience some of those great memories I had from when I was their age.

It really was a Texas sized adventure.