0
Read Time:3 Minute, 46 Second
And now introducing Scoliosis and Kyphosis.
Scoliosis is a sideways curvature of the spine that occurs most often during the growth spurt just before puberty. While scoliosis can be caused by conditions such as cerebral palsy and muscular dystrophy, the cause of most scoliosis is unknown.
Kyphosis is the excessive outward curvature of the spine, causing hunching of the back
Two things Pre Rett diagnosis, I knew nothing about. Honestly,  I knew what scoliosis was, but not Kyphosis. When Magnolia was diagnosed, scoliosis was one of those symptoms that I thought, we can fight it. So that’s what we have been doing. Mags is almost 8 years old. We have been battling the symptoms of Rett for 5 years. We have purposefully tried to prevent scoliosis. She has been in horse therapy. Physical therapy, Occupational therapy and doing yoga for 5 years. If we see a change in her body, we try to help her, we help correct it through therapy, stretches and strength exercises. The past 6 months Rett has attacked her body, specifically her positioning/alignment. Her right arms is stuck out a little, which throws off her back alignment, so we brace her arms to help.   Her shoulders hunch forward and her head tilts down, so we tighten the straps on her theratog, in hopes it will help. Her hips aren’t aligned perfectly because one leg is a little bit shorter than the other, so we use orthotics and lifts in her shoes to help realign her body. All of this matters because, if we ignored it, it could lead to scoliosis. It is a lot of work for us and for her.
Equipment, therapy, stretching, exercises, and the constant guessing – it is overwhelming. Along with everything else, we do all of this daily, to help prevent, to help strengthen, to help fight back. It can get frustrating but she pushes through.
Her favorite and ours is horse therapy. If she could go everyday, she would be thrilled.  It’s crazy to think, it might not work. We tend to focus on the positive but occasionally, we are slapped in the face with the reality of no matter how hard we work at it, it still might happen. Plenty of girls and boys with Rett Syndrome end up having spinal surgery. We are very aware of this.
AJ and I had to have a heart to heart discussion about our next steps for her. All summer long it has been a struggle for her to keep her head up. She walks with it down, sits with it down, stands with it down. Her upper back is curving forward and also shifting to the right. Even with all of the bracing and therapy. She has actually fallen forward and hit her head on the table several times, just because her head is down.  Her body has crumpled while standing. That’s Rett syndrome.  It’s hard, not just because I don’t want her to have scoliosis or kyphosis, but because she communicates with her eyes, if her head is down, we can’t see her eyes. She simply can’t communicate with her head down. 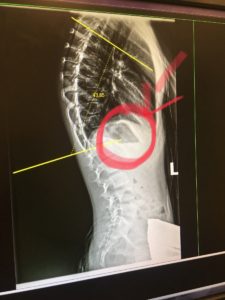 This week we took her to a specialist for X-rays. AJ and I were both…ahem…bracing for the diagnosis that she was going to need more bracing.   When the doctor told us, right now, there is the tiniest of curves happening at the bottom of her spine, but nothing to worry about yet. I was so surprised. It’s there, but it’s just barely there. And as for the kyphosis, there is nothing to fully worry about with that either. Structurally her spine is still okay.  That was a gigantic relief to hear.  But one thing he did point out was that giant air bubble right in the middle of her chest. The air is from hyperventilating and it must be painful.  Ironically, the pain is probably causing her to hyperventilate and breath hold. Its cyclical…. If you have any suggestions on getting air bubbles, not gas, but air bubbles out of her  lungs, I’m all ears.  My theory is, she is in pain from the pressure of the air in her body. Could the pain be causing her to hunch? 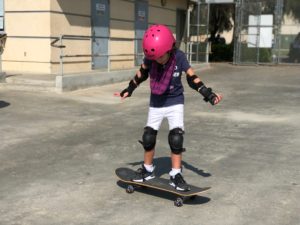 Although this pic shows her as an awesome skatergirl, you can see her body fighting against her.  It must be so infuriating for her that she can barely keep her head up.
And if she could, she’d be able to use her eyes to tell us.
Facebook
Twitter
Pinterest
LinkedIn