Today we were sitting at our dining table.  Maggie wasn’t eating, so we had been sitting there for awhile. Gray had finished his snack, had played with some puzzles and then made his way back to the table. He looks at me and says, “I want Mags to play more.”

My first thought was, “AAAHHH!”

What do I say to that? He is 2 ½ years old and he wants his sister to play. I think we have been doing a pretty good job of having both of our kids play together, helping Maggie play with him. But in that moment all I could think of was, “Crap! Me too! I want her to play with you too.” And worse, she would love to play with you too.

Maggie, apparently, had the exact same thought as me, interjecting on her Tobii with an, “AAAHHH!” herself. Not kidding. She said AAAHHH!

Gray stood next to Maggie’s chair as she would look at her computer to say AAAHHH!! He would immediately turn to say to her  “No AAAHHH! Mags, No AAAHHH!! This happened at least 5 times. It was amazing. It was their first argument, or tiff, as you will.

Honestly at that moment, I was also annoyed that she couldn’t play  because of Rett. Gray was obviously annoyed and Mags made it known that she was annoyed.

Honestly, he is an awesome little kid and little brother to Mags. We were going swimming today and the only thing he wanted was for Mags to wear floaties because she might not be safe. I love that he is thinking about safety but I might have to rethink how to communicate her safety around him, so he isn’t stressed.

He is two and a half and he gets it. He knows she can’t play as much, he knows she isn’t safe while we swim and he wants to protect her. He is a great brother.

We are a team. We have our moments, but we are in this together, even on the frustrating days. We spend a lot of time focusing on what Maggie needs. We try to balance Gray’s life, but the truth is it’s not balanced. His sister has Rett Syndrome, she needs extra help.  Luckily, he’s there to help her. 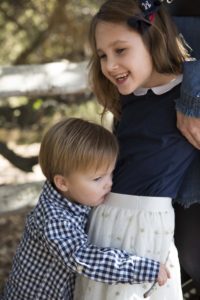